Arginine and lysine: the impact of their correlation on the productivity of young quails

Recently, interest of consumers to quails meat to rising. The reason for this – high biological value of meat. But in literature the little informationon on rationing of arginine and lysine in mixed fodders. This greatly effects on the quality of meat. Many studies confirmed the need for rationing of arginine and lysine for animal growth. Quails are no exception. The effect of these amino acids was not studied on productivity of this birds. That is why we delivered the aim to establish the optimal level and correlations of arginine and lysine in feeding of quails and study their impact on the growth. To solve it, we delivered the following objectives: to investigate the effect of different levels and correlations of amino acids in mixed fodder on live weight, average and relative increase of body weight. So were carried relevant research in the scientific and research laboratory of feed additives of National University of Life and Environmental Sciences of Ukraine on quails of breeds Pharaoh. For the experiment were selected 300 quails. Of them were formed 3 groups. We twice daily fed the mixed fodder of quails. The chemical composition of mixed fodders the differed only on the content of amino acids which we studied. We studied the growth of young quails depending on the content of lysine and arginine in mixed fodder and their correlations. We established that growing quails on fodder with optimal levels of arginine and lysine within a period of growth, and adapted compound feed, subject to the optimum ratio of amino acids for two periods of growth, had a little difference in favor of the first: live weight, relative, average daily gain – 1.0%, 0.1% and 1.1% respectively. Оptimal levels of arginine and lysine for young quails in the second period of growth is 1.26% and 1.29% respectively. The optimal correlation of arginine to lysine is 0.98. Subsequent of this work is to study the effect of different levels and correlations of lysine and arginine in mixed fodder for young quails for meat quality and chemical composition of meat. 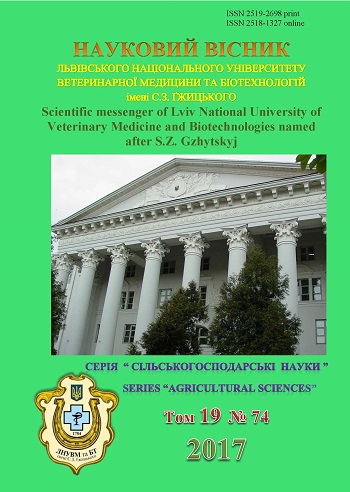