Intensification of agriculture that has been going on in Ukraine, has a negative impact not only on the environment but also depletes natural resources, without which agricultural production impossible. Organic production provides a real benefit to the environment and human health. Domestic consumers seeking to improve the quality of consumption of vegetable products. The article presents the results of studies on the dependence of yield of roots beet varieties Bordeaux Kharkiv and cylinders from sowing.

Intensification of agriculture, that lately takes place in Ukraine, has negative influence not only on an environment but also exhausts natural resources without that the conduct of agricultural production is impossible. Having regard to potential of agriculture of our state, there is an urgent necessity of the use of long-term experience of the European countries in relation to such ecologically, socially - and economically expedient direction of agricultural activity, as an organic production.

An organic production provides the real benefit for an environment and health of people.The domestic consumers aspire to the increase of quality  consumption of vegetable products. Growing of vegetables at this method, is based on maximal application of scientifically-reasonable crop rotations, use of siderates and organic fertilizers, wide use of biological facilities, defence of plants from wreckers and illnesses, new going near technology of till of soil. Advantages of organic method of production, above traditional, consists in that at growing of с/g of products does not use synthetic mineral fertilizers, pesticides, regulators of height and genetically modified organisms, accordingly get the products of the best quality. For providing of population, including table beets a necessary amount and assortment of vegetables, it is necessary to promote their productivity and biochemical quality.

More favourable work of organic sector of Ukraine is restrained by the imperfect institutional providing. For today state support of development of organic sector is declared only in a few normative acts basic from that is : Law of Ukraine«On a production and turnover of organic agricultural produce and raw material» [6] but the Government having a special purpose program of development of the Ukrainian village on a period 2020 to the year.

Ukraine is the agrarian state, sector of plant-grower, provides food safety and food independence of country. In an order to go out on a world level from growing of organic products, it is necessary to stimulate the agriculture of producers, and increase the network of quality organic production distribution. In the article is  given the results of researches from the study of dependence of the productivity of root crops of beet the table of sorts of Claret Kharkiv and Cylinder from the terms of sowing. The ways of exit of producers of organic products are offered to the market through distribution of network of shops from organic production distribution. The basic channels of sale for organic foods in Ukraine are specialized departments of supermarkets and small shops. Having regard to the increase of demand, a seating capacity increases, where it is possible to purchase natural organic products.

Stability of sort of Claret Kharkiv is higher comparatively with the sort of Cylinder. The productivity of beets a table depends on terms of sowing. Taking into account that a sort of Cylinder is more intensive, stability was below, that characteristically for high-performance sorts. 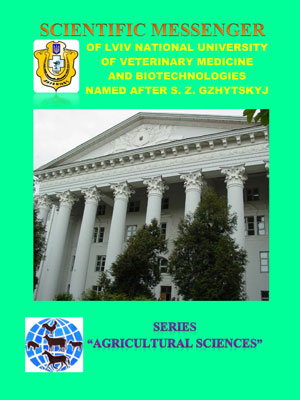