Electron microscopic research of the cells mucous membrane of the colon of pigs 70-day old, showed that the epithelial cells have a cylindrical shape and are tightly connected to each other. On the apical surface of the cells are placed small, short, single microvilli. Cytoplasm of moderate electron density. Contains a moderate amount of ribosomes, as well as moderately developed structures of the Golgi complex and endoplasmic reticulum. Cell nuclei were located near the basal membrane, a rounded shape. Condensed chromatin is concentrated, both near of the nuclear shell and evenly throughout the entire area of the nucleoplasm. In the nuclear shell, small pores are seen. Enteroendocrine cells in the mucosa of the colon had a trapezoidal shape. Most of the apical site of cytoplasm of the cells occupied a different sizes osmiophilic granules of secretions, among which were viewed individual organelles. The nucleus is of a rounded shape, often with one electronically dense nucleolus. Endocrinocytes have a close connection with the fenestrated by the blood capillaries. The epithelial layer includes goblet cells that have a narrow base and a wide apical zone where the presence of secretory granules was noted. Nuclear envelope with multiple invaginations and a significant content of compact chromatin. On the apical surface of the cells there were single, elongated forms – microvilli. Absorption cells are high and narrow, on the apical surface of which there are short and rare microvilli. Osmiophil granules of secretion were noted in the cytoplasm of cells. These results demonstrate the normal electron structure of the cells of the mucous membrane of the large intestine of pigs, Which will be useful in cases when there will be a need to study the structure of the intestine when feeding an animal various feed supplements.

Le Dividich, J., Seve, B. (2000). Effects of underfeeding during the weaning period on growth, metabolism and hormonal adjustments in the piglet. Domestic Anim Endocrinol. 19, 63–74. 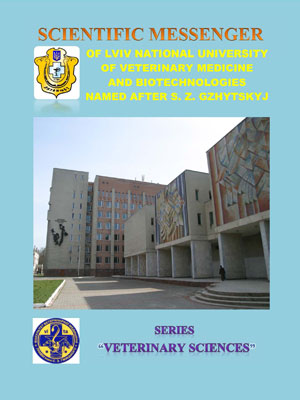