The history of the treatment of animals in Lviv

During the XV – first half of the XVII century, Lviv was the artisan, educational and cultural center of Ukraine due to the fact that it stood at the intersection of major European roads and was a well-known market center for sales, exchange and commodity production in Central and Southern Europe. The first schools for the training of medical specialists were family, that is, family schools. Later, the schools became known as workshops. In the 14th century the workshops were independent higher educational institutions and were not part of the universities, even in Europe, as it was regulated by the statutes of universities. Ukrainian workshops later started out academies and universities and had the attributes of higher educational institutions: statute, flag, seal, ciches, icons, which testified the place and importance of the school (shop) in the life of the country. The prince (king) gave the certificate of the opening of the school. The statute of the work shop was extended to members of the association: a student, an apprentice and a master. Workshops  statutes were legal documents and often were not changed much for centuries. Medieval archival documents of the XIV – first half of the XVII century (workshops statutes, books on current affairs, books of the city authorities) quite fully reflect the Lviv workshop structure not only quantitatively but also professionally. The two oldest statutes of the blacksmith shop in 1529 and 1558 are stored in the Lviv State Historical Archives. In the future, the blacksmiths-conquerors were engaged in the treatment of not only horses but other animals. Particularly in the fight against poisonous animal diseases, they enriched the experience of medical practice, which was passed on to subsequent generations. However, all of these were educational institutions, in which a small number of qualified medical specialists trained, and the majority of the population and animals were served by  healers, bloodshed, blacksmiths, and veterinary doctors. Diagnosis of diseases at that time was based mainly on using only their senses: it was investigated the movement of animals, body temperature, eye color, condition of the tongue, nasal mirror, mouth and nasal cavity, removing sweat, urine, breath, nostrils and so on. In countries that were under the care of Austria, Hungary, Poland and other countries of Western Europe, has acted veterinary service structure of relevant states. Already in the XII – XIII centuries laws have been enacted and the measures were developed, aimed at preventing the emergence and spread of diseases (quarantine disposal of dead animals, compliance with sanitary regulations, etc.). Great attention was paid to protecting people from infectious diseases. Opening of veterinary school and horses forging was the result of the rise of trade and economic, cultural and educational ties in the medieval city, which was contributed to the birth and development of the work shop structure that gave the beginning of a medical case, and later – the birth of veterinary education in Galicia. 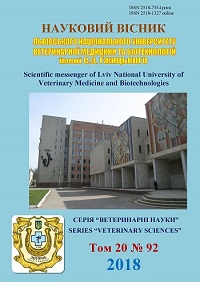